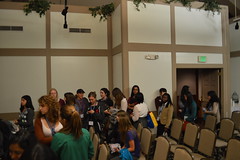 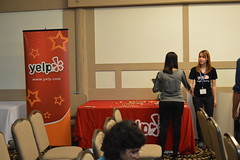 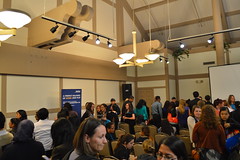 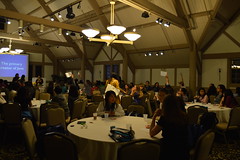 WICS members got the opportunity to attend the Celebration of Women in Computing in Southern California (CWIC-SoCal) Conference held on April 5th and 6th. WICS provided attendees reimbursement for signup fees as well as free transportation!

The event kicked off with a welcoming ceremony that consisted of talks from inspirational women in the computing field. The talks were held by a broad scope of women all united by the core concept of computing. The backgrounds of these women ranged from industry to research. In fact, Gloria Mark, a professor from the Informatics department of UCI also held a talk of her research of multitasking.

The WICS members learned about grad school, what these speakers do, and about women in the tech field in general. There was also a Q/A panel with company representatives as well as a mentorship panel. At the end of the first day, CWIC-SoCal also held an Academic/Career Fair with quite a few company booths, swag, and networking opportunities. That night ended with a Lego Challenge and a game of CS jeopardy. The winners of the lego competition, 5 groups of 5, all received $25 Amazon gift cards, congrats to one of the WICS’s teams that won!

All in all, it was a very exciting weekend that consisted of fun and networking with other women students and professionals in computing. Next year, WICS will be hosting init(Together) once again, stay tuned and don’t miss out!